Bangkok - Thailand’s capital, is a sprawling metropolis known for its ornate shrines and vibrant street life. The boat-filled Chao Phraya River feeds its network of canals, flowing past the Rattanakosin royal district, home to the opulent Grand Palace and its sacred Emerald Buddha temple. Nearby is Wat Pho with its enormous reclining Buddha and, on the opposite shore, Wat Arun with its steep steps and Khmer-style spire

Pattaya - Is a town on Thailand’s eastern Gulf coast known for a wild nightlife scene that attracts international visitors, weekenders from Bangkok and expats. A quiet fishing village as recently as the 1960s, it’s now lined with resort hotels, high-rise condos and a large seaside mall. Jet-skiing and parasailing are popular activities at Pattaya's busy beaches.

Phuket - A rain forested, mountainous island in the Andaman Sea, has some of Thailand’s most popular beaches, mostly situated along the clear waters of the western shore. The island is home to many high-end seaside resorts, spas and restaurants. Patong, the main town, has a more casual vibe and is filled with wild nightclubs, bars and discos.

Krabi - The capital of southern Thailand's Krabi Province, is a resort town near the Andaman coast. It lies in an area of limestone karsts and mangrove forest. On a hilltop reached by stairs, the Tiger Cave Temple is a Buddhist site with panoramic views. Khao Kanab Nam, 2 slanting hills rising out of water, form a local landmark. Andaman Sea destinations like the Phi Phi Islands are accessible by ferry.

Ko Samui - one of Thailand’s largest islands in the Gulf of Thailand, is known for its palm-fringed beaches circling coconut groves and dense, mountainous rainforest. It’s also home to luxury resorts, posh spas and a rowdy nightlife scene that often attracts a backpacker crowd. The 12m-tall golden Big Buddha statue at Wat Phra Yai temple is a local landmark.

Chiang Mai - is a city in mountainous northern Thailand that dates back to the 1200s. Its Old City area still retains vestiges of walls and moats from its history as a cultural and religious center. It’s also home to hundreds of elaborate temples, including 14th-century Wat Phra Singh and 15th-century Wat Chedi Luang, adorned with carved serpents

Thailand is a country on Southeast Asia’s Indochina peninsula known for tropical beaches, opulent royal palaces, ancient ruins and ornate temples displaying figures of Buddha, a revered symbol. In Bangkok, the capital, an ultramodern cityscape rises next to quiet canal and riverside communities. Commercial hubs such as Chinatown consist of labyrinthine alleys crammed with shophouses, markets and diners

Kingdom of Thailand - Thailand is a kingdom ! I got to know that when I visited Thailand for the first time. The king is highly respected by all the people. You'll see pictures of the king and queen all over the country such as in shops, homes, along the streets, in taxis and so on.

"Thai" means "free", therefore, "Thailand" means "Land of the Free." It must show their pride about the fact that Thailand is the only one country that has never been colonized in Southeast Asia while other countries around were colonized by Great Britain and France. 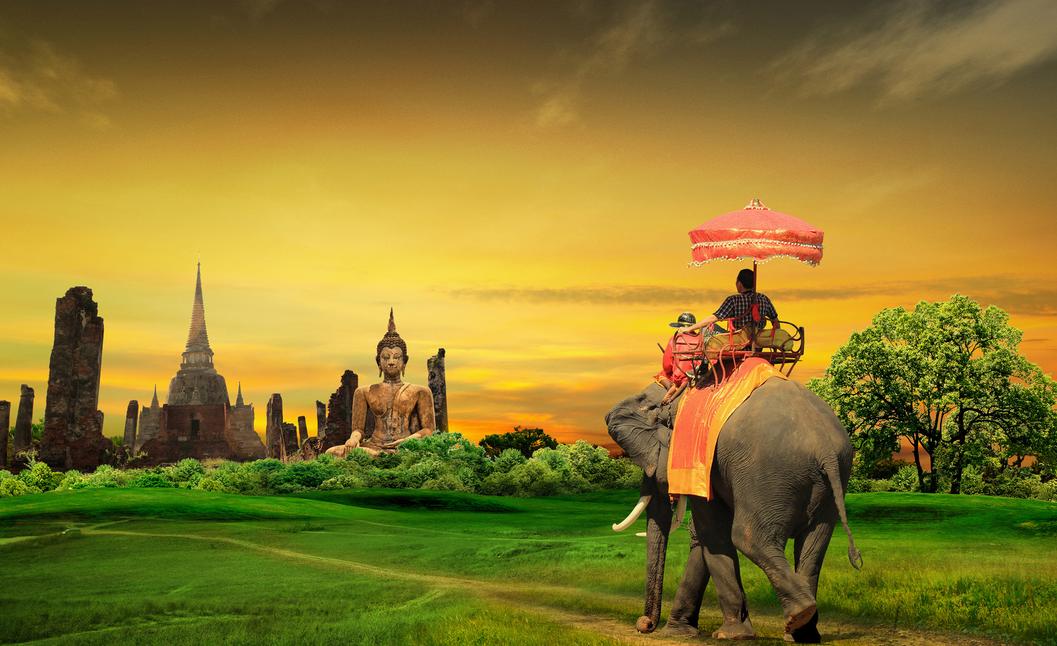